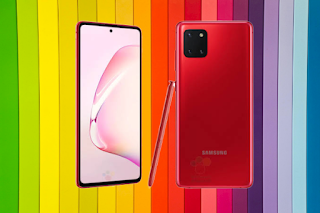 The new price is from the Iberian Peninsula region, which is available on the southwestern side of Europe.
At the moment, nothing has been said regarding the launch of this phone in India.
If it launches, the price will be around this.
Recently, the phone appeared in black, red and white gradient finish in the leaked renders of Galaxy Note 10 Lite.
Renders indicate that the phone will come with a flat hole-punch display and a triple rear camera setup.
The white model is seen with the S Pen Blue finish.
Talking about the important specification, the Samsung Galaxy Note 10 Lite will come with the Exynos 9810 processor, 6 GB RAM, and 32-megapixel primary camera.
The sale of the Samsung Galaxy Note 10 Lite is expected to begin on December 27.
An important feature of this phone will be the S Pen.
The phone has been reported to have Bluetooth 5.1 support.
Samsung Galaxy Note 10 Lite Tech News